Tuning into the AYPE with Lorraine McConaghy

Last night, my husband and I were sitting with the television tuned to a popular Seattle KING-5 program, Evening Magazine, when I heard a familiar but unexpected voice suddenly coming into my family room. It was Nearby Norwegians' friend and mentor, Dr. Lorraine McConaghy, lead historian of the Museum of History and Industry (MOHAI). Evening Magazine arranged to interview Lorraine about the Alaska Yukon Pacific Exposition of 1909. This year marks the centennial of the "AYPE"--an event of critical importance in the history of Seattle. The television video includes many archival photographs of the AYPE, and even a motion picture excerpt from "Norway Day." You can view the video and watch as 1909 Vikings disembark at the fair grounds: Seattle's first world's fair. In any case, it's always a pleasure for us to hear Lorraine again--a lady of many talents who is passionate about history, and has enabled that passion in so many others.

Chery Kinnick
Posted by Nearby Norwegians at 10:00 PM No comments:

This coming Saturday, March 28, there is a very special happening at the Leif Erikson Lodge 2-001, Sons of Norway, at 2245 NW 57th Street in the Ballard district of Seattle. The lodge is hosting its annual Norwegian Cultural and Heritage Day from 10:00 a.m - 4:00 p.m. Admission is free and events are open to the public. There will be demonstrations of traditional Norwegian handicrafts, music, dance, song, food preparation, and presentations throughout the day.

Welcome to our home and table!
Posted by Nearby Norwegians at 9:37 PM No comments:

We'd be the first to admit that the pursuit of genealogy and family history is downright catchy. As Nearby Norwegians, we are usually on the lookout for materials and bits of information that may be helpful to others who are also history-minded (afflicted?).... and that is why our mission statement includes "giving back."

Genealogy does not involve a contest to see who can "bag" the longest list of names or the greatest number of dates. Oh, and it certainly is not meant to be like the seventh grade history class that nearly turned you OFF to any further consideration of history--family-related, or not. Instead, the pursuit of genealogy and family history is an enjoyable detective game where everyone stands to benefit by satisfying collaborations. "You watch mine and I'll watch yours" is the order of the day, since the collection and interpretation of historical facts and artifacts is not easily done alone.


Genealogy is contagious, but seldom fatal

Recently, in the spirit of collaboration, our very own Cathy Lykes was able to help out a dear friend of the Nearby Norwegians, the illustrious and ever-stylish footnoteMaven. "Maven," who is often referred to simply as "fM" because of the fondness she inspires, gave special thanks to Cathy for her sharing spirit... and more, in a recent blog entry.


Cathy is an extremely talented photographer, a great writer, and a wonderful friend. She can be found hanging out with a few of my other real life, geneablogger, Nearby History friends at Nearby Norwegians, a great must read blog.

What did Cathy do that was so appreciated by footnoteMaven?

Who IS footnoteMaven, anyway?

Read her blog entry: Tea With Me, But Who Am I? It will give you a look-see at the reasons behind what genealogists and family historians just do for one another as second nature.


...And thanks for the vote of confidence in the Nearby Norwegians, fM!

Posted by Nearby Norwegians at 6:06 AM No comments:

A "Nod and a Wink" to Our Irish Ancestry 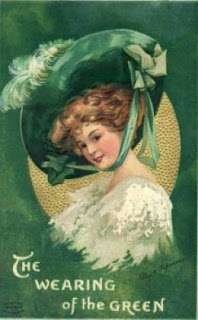 As Nearby Norwegians, we tend to focus on Nordic culture and traditions. But, we find we cannot ignore the siren call of the shamrock on St. Patty's Day each March 17th. That should not be terribly surprising, because even St. Patrick himself was not Irish, but a Roman-Briton born Christian missionary who became a patron saint of Ireland. Truth be told, more than one of our group members claim some Irish ancestry in addition to their Norwegian heritage. [1]

Perhaps there is additional motivation to celebrate St. Patrick's Day for people like me who were born with an uncertain mix of Scandinavian and Celtic DNA: a sense of duty even, or... is it a sense of appeasement? After all, those Viking seafarers were mighty attracted to the comely lasses along the Irish coast. Recent DNA research has shown that a large portion of Icelanders are in large part Irish, resulting from all the "Maggie Reds" who were courted, convinced, or outright abducted, and then found themselves serving up grog and cod to their Viking mates on a foreign shore. Then, oh dear, there is the incident concerning some modern-day "Vikings" who sailed into Dublin Harbor during the summer of 2007, boldly intent on apologizing to the Irish for their bad behavior of over ten centuries ago. Better late than never, I suppose. [2] [3]

Luci's papa claims to be a "Heinz 57" variety, but will say he is Irish when pushed. She has documented her father's roots back to Ireland, where his fifth great-grandfather came from Stweartwtwon in Tryoe County. After the age of five, Luci grew up in St. Paul, Minnesota, where the Irish are known to have played an itegral part in the city's founding and growth. St. Paul held Minnesota's first St. Patrick's Day parade in 1851--an impromptu event with participants partaking in flag-raising, speeches, and a fired salute. The Irish were every bit as attached to their homeland as the Norwegians, it seems, but a bit more demonstrative about it. [5]

My mother, who was born in Minnesota, but whose family is full-blooded Norwegian on both her mother's and father's side, celebrates her birthday on St. Patrick's Day. For as long as I can remember, her birthday cards and gift wrapping have not reflected her Scandinavian background, but were more likely to have been studded with clover leaves, leprechauns, and green, green, and more green. As for me, my non-Norwegian side leans more toward Scotland, as far as I can tell, but since I am not really certain what my ancestors have been up to, I always play it safe and participate in the "wearing of the green" each March 17th. 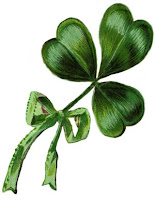 To quote an Irish toast:


If you’re enough lucky to be Irish...
You’re lucky enough!

Posted by Nearby Norwegians at 12:42 PM No comments: 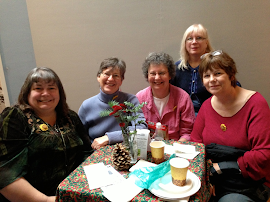